Bestest art teacher in the world ^_^

Well I thought I'd do a few posts since I've now finished school, and I think I'll do three which are related to teachers (including this one).

This here post is dedicated to the coolness of my art teacher Mr.Wadwell, from having years of crap art teachers who sit there and make you do nothing, for once I've been made to do art for the past two years. I had always liked art but pretty much sucked.

And as he puts it he taught me how to draw, now I could draw before, just not so well, I've learnt a lot from him and am happy I had such a good teacher for these past two years.

He was also a pretty cool teacher as he had an okish taste in films, great taste in music and was alround a fun person to be around, shame he was so sarcastic sometimes, it could get old when you've heard the same thing about 5 times

But enough of that, I'm so happy that my art has developed so well, as otherwise I probably wouldn't have decided to go to uni, and he's the reason I decided to go with art.

If there's any teacher I'm gonna miss the most it'll probably be him, altho it's gonna be hard to forget Mr.McLeod or of course Mr.Morris, pictures and a bit of writing about these two teachers coming soon when I have a photo ^_^

For those that haven't seen him, here he is in all his glory 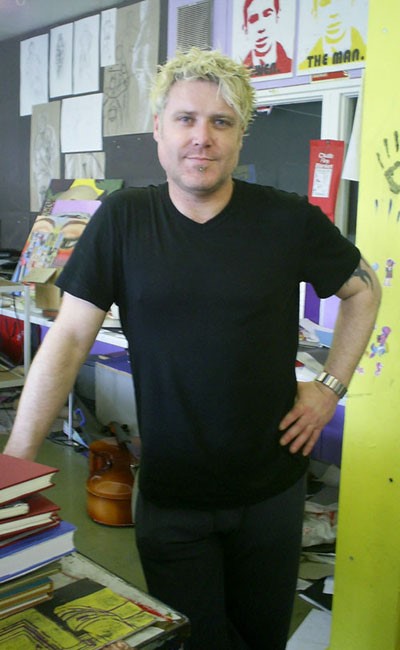 Apparently he had 19 piercings...or maybe it was 15, whatever it was I've never had a teacher like that in my life ^_^ since they're usually all so serious.