Eight: Ghost Trick is out on Friday!

So something I had the chance to play earlier on in 2010 at a Nintendo event on behalf of Gamercast was Capcom's upcoming title Ghost Trick: Phantom Detective. I'd kept an eye on it since the announcement and was always pretty keen on seeing what Shu Takumi was doing with the game after having solely worked on the Ace Attorney series. I must say I was pleasantly surprised with how much I enjoyed the game, and surprised that not many people were trying it out. It was only a demo that I played but it felt solid, everything fit together nicely and there wasn't too much dialogue to take in.

Being a big fan of the Pheonix Wright games (however I haven't managed to finish them all), I knew before I even played it that I needed this game as it's something very different to what they've been creating since 2001.

The game is all about memories, souls and dead people, specifically Sissel; the main character. The game starts with him waking up dead (sounds a bit weird right?) and not knowing the exact reasons to why he's dead or how he actually died. The clues however point him to a detective called Lynne who may know what happened.

The gameplay sticks you in control of this "dead" character allowing you the ability to possess inanimate objects in order to save people. You have to do this to find out exactly what's going on before your soul is lost forever.

It also has a great art style as you may be able to tell from the image on the left, and is fairly different to the usual Pheonix art style, and looking more like a mix between Pheonix Wright and Viewtiful Joe. 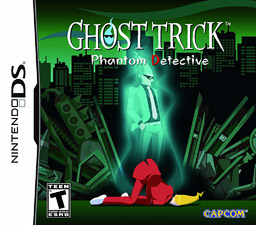 Any DS owners out there I urge you to check out this little beauty as it is definitely something different and a great little game involving the ideas of cause and effect.

I'll also mention as well of course that Capcom's other upcoming DS title Okamiden will be coming out in March over here, and for any fans of the original Okami or beautiful visuals should put down a pre-order as it's also another game you shouldn't miss out on.

Provided the release date doesn't slip at all I'm looking forward to my copy of Ghost Trick arriving by the 14th so I can start carrying around my DSi again.

Bit of a short post today but I managed to waste away my day playing some great games, so I thought I'd just remind everyone this great game is out on Friday.