Fifty Nine: Looking back at Flipull

So you may or may not of heard of a little puzzle game known as Flipull, a Taito game developed back in the late 80s/early 90s. Flipull was available on a multitude of platforms as well as being available under the alias of Plotting on home computers; however the version in question is actually the Game Boy variant that I played to absolute death back on my original Game Boy.

Flipull wasn't your average puzzle game of the time; it required a little more strategy than your average drop and match puzzle game, relying on you to use your environment to link blocks together. Overall it's a simple game of snap, requiring you to shoot your block onto a direct match, which then gives you the block that was behind/underneath it dependant on which direction you paired the blocks together from. More strategy is required than just making pairs though as you will need to make sure that the block you are then given in return has a reachable pair. If however you cannot reach the pair for your cube you then "miss" requiring you to use one of your special "S" blocks that pair with anything. This was your way of loosing as you only get a set number of these per level, and once gone if you run into a block that cannot be paired you've lost the game. 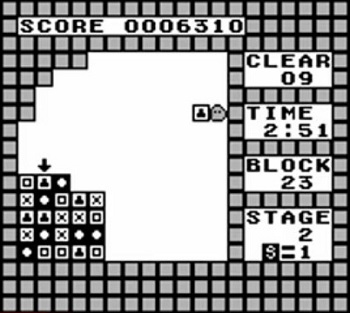 You play as a little blobby object who seems determined to clear the area of a type of block, of course there is no actual story and the blob is just an avatar to cause you to interact with the game, it could just be an arrow or a machine, but the blob adds an object that is a little less square when compared to every other aspect of the game.

Each puzzle has a different arrangement of marked blocks and occasionally a different shaped environment, be it with a line of four diagonal blocks, or much less. Giving you fewer options to getting your block to the others adding various layers of complexity to the game.

Featuring simplistic and recognisable graphics along with addictive music and at times complex gameplay Flipull was a favourite of mine on the Game Boy which can be actually be replayed on more recent consoles thanks to the Taito Legends compilation that was released on the Xbox, PS2 and Windows, I recommend fans of challenging puzzles to give it a go.