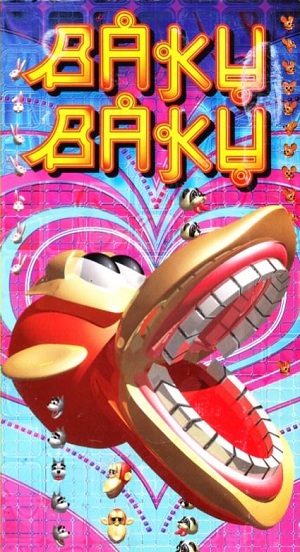 Going back on track with my looking back posts, I’ve got enough time to post about another little gem I spent hours on back on the Sega Saturn, and that game is Baku Baku.

Baku Baku was released for a variety of platforms; however its base console in my eyes was on the Sega Saturn; released by SEGA back in 1996 Baku Baku is a simple puzzle game of lining up tiles, in particular though you line up animals with the food they eat. What made it different to your usual drop and match puzzle game though is that there was no need to wait for three sets of food. You could have your animal; be it a panda, monkey, dog or rabbit they could eat one piece of food or you could strategically place lots of food to have them munch up more than a mouth-full. The more you had your animals eat the more blocks that would fall into your opponent’s level, increasing your chance of winning.

Being a game made back in the 90s it had the usual round and puffy 3D style to keep with the times, the cutscenes were adequate although always looked a little funny, but the best part of the game was in the interaction between the blocks while playing. Blocks didn’t just disappear when lined up with the appropriate animal, but the animals actually grow out of their cubes and start munching away. The gave the game more life than your average puzzle game as the look of your animals’ heads jumping out of the cubes and eating away was something not replicated in any other games at the time.

The only real mode in the game is labelled as arcade; however you can do two player with a friend. Being an old game though playing on 1 Player mode was pretty hardcore and was very tough to finish. The story follows a king, his advisor and a princess, who happens to want a new pet, you’re hired to work as a zookeeper for her masses of pets, and the aim is to make sure her pets are looked after. You are given the choice of playing as Polly; a Goldilocks style girl or Gon; a sad looking little boy, reminiscent of Snufkin. As the zookeeper you have to go up against rivals such as Piggy, Gallopy and Silver Angela, making sure you do what zookeepers’ do best, feed animals.

Of course there are some really great drop puzzle games out there, like Columns, Dr. Mario, Lumines, Mario & Yoshi, Puyo Puyo and of course you can’t forget about Tetris. However Baku Baku has always been memorable to me, it may be the oddly cute animals, the weird sound effects, the munching sounds or maybe just from playing it for hours. Either way I recommend trying out Baku Baku, especially if you can find a JAMMA cart for it and happen to have an arcade machine that can take the carts. If not the Saturn version will do just fine for anyone wanting to give it a play.