This Friday just passed marked an event called Global Game Jam, of which I took part in. Originally I wasn't going to, as I have enough work of my own to be doing for my third year project, but Charlotte convinced me to go with her and Tim.

Global Game Jam was an event where people all over the world, I think just over 2000 in total maybe, all get into groups and attempt to make games in 48 hours. We started on Friday the 30th at 5pm and then finished on Sunday the 1st at 3pm.

After pitching ideas and everything we all started working on our games, so by about maybe 6/7ish we had started designing stuff, in my groups case I was designing the characters.

We were called Super Cute Animal Attack, our group compromised of myself, Charlotte (my twin sister) and Tim (her boyfriend), Tim graduated from the Games and AI course at Newport, and Charlotte is a film student wanting to get into the games industry, and I of course am a Games Design student wanting to also get a job in the industry.

Our idea we went with in the end was firstly titled "Mmmm" which was a game about the relationship between a Cajun squirrel and a Mexican duck and having to make their way through an area, which was slowly being destroyed by a giant robot koala, think the boss in Dynamite Headdy right near the start, not the cat though. We had a few constraints to the game these being the following:

The game evolved over time, including the title of it being changed.

The developed story of the game is:

Best of Friends Lash La Rue and Juan the Duck are travelling the world together. But everyone has their own problems, proud of his culture Juan never leaves behind his poncho, and therefore cannot fly. Lash La Rue on the other hand, is terrified of the water, together they will successfully tour the world's jungles, deserts, wetlands and mountains, and they both know that if they didn't have each other they would get nowhere.
Although, having their own busy lives, the two only booked out a certain amount of holiday for their world tour, with only a fortnight's travel to go, they must be as quick as possible if they want to visit all fourteen destinations before they close, and if they don't work together, they'll only spend their whole holiday arguing

For submission we were asked to submit a press image for our game, ours is particularly nice as we managed to get David Surman to draw the main image for us, the smaller drawn image is also done by Bill Kavanagh (as photos are a big part of the game, this is down to the fact that memories are best kept in photos, in the finished game the two below drawn images will be shown during play, along with others showing the two friends working together). 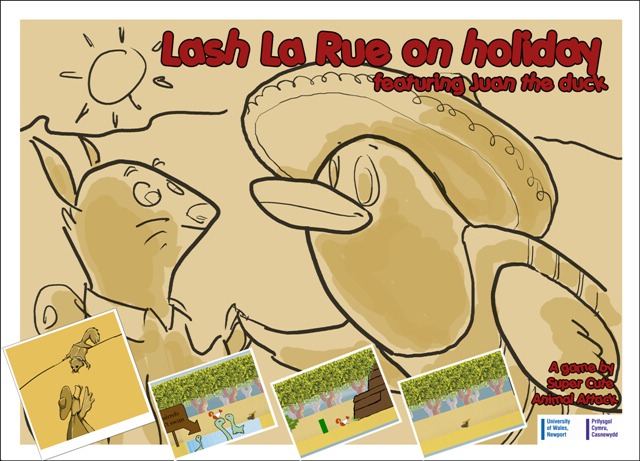 You can play a copy of the game from here on the Global Game Jam website, you can also view all the other games made in Newport and also all over the world.

As you can tell from the game, it is in a quite unfinished state, but we intend on finishing the game with a bit of our free time, in fact I have already started on a new splash screen along with the instructions page, which will nicely fit in with the concept behind the idea.

A few bugs which are quite noticeable, which I will point out are:

As you can see from the items I've listed we realise that there are a few problems, but they will get ironed out and then a newer build will be posted up, the version on the GGJ website is 1.0 we hope to have 1.1 sorted at some point, at least with actual titles.

I would also like to point out that the music for the game was created by Rob Bennion who if I get this correct is a Jazz Musician/composer who very kindly produced our group a whole bunch of music in the space of a few hours, while also helping other groups at Newport. I would like to thank him very much for creating so much music in so little time. We will hopefully be using his services a little more while we get the game to a more finished level.

I must say the weekend was an unforgettable event and that it was a lovely way to start the year, and even though we didn't get a completely polished finished game out of it, I'm amazed at what can happen in 48 hours. Of course when sleep isn't exactly involved it's not a good thing.

Super Cute Animal Attack did also want to do their other game, which we also hope to do, either while finishing off Lash La Rue on holiday or once it's finished. I won't be posting up anything about it though as it hasn't been started, but it is a bit simpler than our Lash game and both myself and Charlotte agree if we went with it we would have had a finished game.

Either way expect more small games coming out of this blog.