Since we started production of the Void project I had only been assigned one task, it makes me feel really bad that I spent so long on it, but it was due to changes each week that I continued on developing it.

I had the task of getting the neutral character rigged, it has gone through many iterations. It started very very simple, but has progressed to a more complex rig.

Which has finally led it to look like this 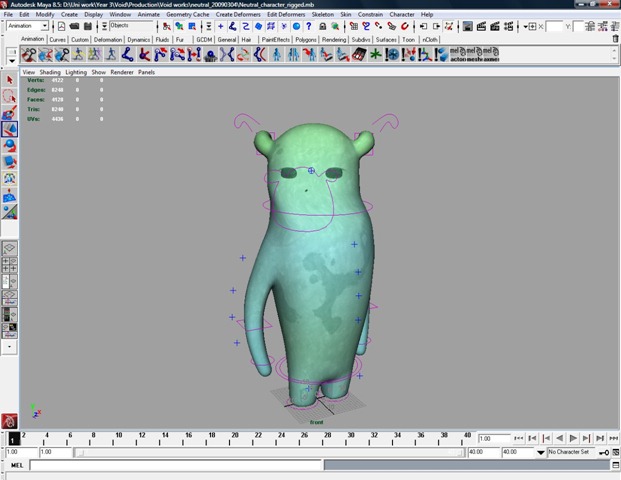 With the two original designs of the rig, I was unaware of controls and manipulators, all I had previously done in the past was a couple of IK handles and a spline curve, and been told about IK FK Blends by a nice person from Blitz.

Although after going through different steps I then created a good rig which works in the engine. The video above shows it when it wasn't working in the engine, due to an unknown reason. This caused me to have to start the rig from scratch. But it then meant that every step I did with the rig now was tested after being added. So to insure that it didn't have any further problems. If it did I could then go back a stage. I now realise unreal needs tests done constantly as it seems like quite a fragile engine.

Either way you look at it, Unreal has made me more aware of the chances of problems. previously I would save a few different files, but now with each iteration it means if anything is to go wrong, I just have to look for the right file.

We now have a nice rigged character, and Caryn is busy animating it.

Also if anyone is wondering, the Unreal 3 engine does not run on a Dell mini 9, so now I have to figure out another way to take our current game about.

Must also say I really like the movement in the problem rig, makes me think of World Record.