One Hundred and Seventy: Ocarina madness

So a long awaited re-release of The Legend of Zelda and the Ocarina of Time has finally arrived. Of course it was released not that long ago for the Nintendo Gamecube, but never before has it been altered so much as now.

Originally I was skeptical to the release, thinking that I could just whip it out on the N64 or Gamecube should I wish to play it. But as more and more was shown on the game I knew I just had to pick it up, I couldn't resist.

I am generally one to pick up re-releases/re-masters/GOTYs either way; from Rez to Plants vs. Zombies on each platform they were released. When I really love a game I can't help but feel an urge to support the developer and give it another go on a different format. 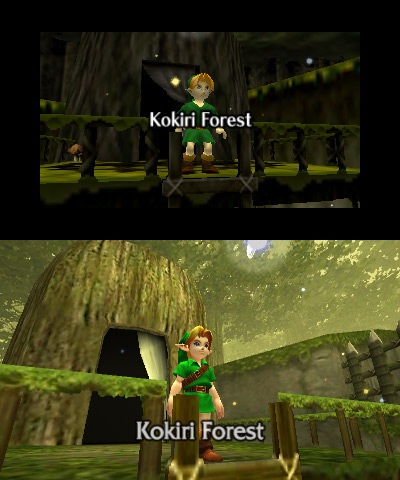 So when so you see a comparison shot like the one to the side it causes a general want to see if it's been enhanced for the best or worst. However in Nintendo's case they don't usually release anything that is in any way flawed or bad.

There are of course a few downsides to a release on a handheld console or of course anything other than the N64 for that matter is that you then have to use virtual controls on the screen instead of the multitude of buttons that the N64 pad featured. Plus you then have such a smaller sized screen what is shown has to be thought out. Luckily the layout seems to work ok and the amount of UI clogging up the main screen is minimal. Although when it comes to the touch screen I'm not sure if it's the same for people with slightly larger fingers as the buttons are all quite close together on the right side of the screen, which cause no problems for me with my little fingers.

As well as the change of buttons they have of course increased the polygon count and upped the resolution of the textures, one downside of it is that you then lose some of the character that Link and everyone contained. However it's a lot nicer to look at, and at times feels almost like a different game and is closer looking to Twilight Princess and less like Ocarina of Time.

My favourite addition thanks to the Nintendo 3DS though is using the gyroscope/accelerometer for moving the first person view around, for the slingshot, bow and more. I found this a lot quicker for doing the mini-games in the market at Hyrule and just generally aiming quickly.

The compelling nature of playing such a classic on a handheld console makes it more than reason to purchase it, having the chance to dive down to the bottom of the Deku tree or hear Malon sing Epona's song at Lon Lon ranch. The only thing I would have added in would have been a music player on the main menu so you could constantly hear some beautiful ocarina music while on the go. But then again that's why we have soundtracks that you can buy.