One Hundred and Sixty Five: Looking back at PaRappa the Rapper

So Parappa the Rapper isn't really that old, having only come out back in 1998 in the UK, it should be one of the best known games out there, especially after being one of the first rhythm action games released. Usually people have heard of it, but may not have had a play of the original. However it’s definitely a game all should play, especially fans of the more recent rhythm action titles.

Some may remember playing the demo that was released just before its release in Official Playstation Magazine, most didn't give it a second chance, originally I didn't. However after playing the demo and having just gotten a Playstation we saw someone selling it in a local newspaper. I was still unsure of the game, but for about £5 (which was very cheap for it being a fairly new game) I thought it'd be good to give it a go and see how much further I could get in the game. 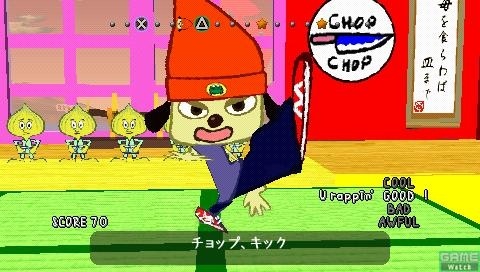 Now I don't know why the concept of pressing the controller buttons to the images displayed on the screen baffled me so much, perhaps from the lack of games with similar mechanics teamed with being of a young age. However after a few play-throughs I finally got the hang of it and I was rapping away on a TV show, in a car and even for the use of a toilet.

PaRappa didn’t only strive on gameplay levels though, it created a Super-flat experience that was a really fresh look for a Playstation title. While most developers were still focusing on beautiful 2D experiences or trying to make cutting edge 3D worlds. PaRappa the Rapper with the unique stylings of Rodney Greenblat created a psuedo-3D world so that his hand-drawn work wasn’t tarnished by a 3D polygonal look.

PaRappa wasn't only about cutesy super flat animals though; it was the challenge of perfecting a level. This was a tough cookie to crack though, it couldn't be accomplished that easily, there was a fine line between perfecting the game by doing precisely what it asked for, or by just rapping the hell out of the game.

Many years later I'm extremely happy that we made the decision to buy PaRappa the Rapper, NanaOn-Sha are now one of my favourite developers and Matsuya has done an amazing job on all his games since then. Some personal favourites being Rhyme Rider Kerorican, Mojib-Ribbon. Plus of course UmJammer Lammy is great, even though it feels a lot stricter than PaRappa.

If you can’t find a copy of PaRappa the Rapper for the Playstation you may be able to find it a little easier for PSP. So make sure to play it if you haven’t as it’s quite the experience, it’s comical, cute and fairly hardcore at times, however you may also hate it.