So back in the day, which isn't that long ago as it was when I started Secondary school in 99 I got my first PC. It had taken a while but it was "needed" for school, plus the spectrum couldn't really do want current PCs could. So there was a purchase (which was great) which lead to me playing some great games. My first proper PC games were the likes of Final Fantasy VIII, The Sims, THPS2 and the amazing Deus Ex. However one other game among those was Star Wars Galaxies, having been a Star Wars fan (who isn't) and with a new PC we (myself and Charlotte) imported it as it wasn't out in the UK at the time.

Not only was it the first game we imported, but it was also the first MMORPG that we had a play of. So SWG for some was a great game, others hated it, however I spent a large amount of time in it and felt that I got a lot of memories out of it.

I was in my first guild which was aptly named the Rebel Alliance, took part in RP'ing and even got married in game, as well as being an awesome Image Designer. It was none of that trying to become a Jedi for me, it was about helping people out and making clothes. Being an Image Designer was particularly awesome at one point as it was bugged so I could give a Bothan Twi'lek tendrils or give a human Zabrak spikes. Which was lots of fun and rolled in lots of money! 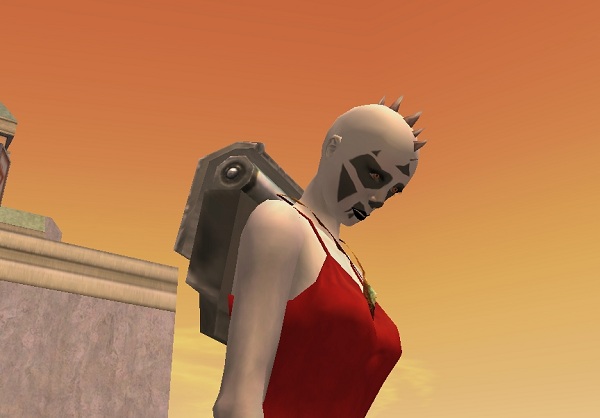 Here was poor Roalia Makaup (game generated name after a long time of randomising) just as I was quitting SWG, I tended to wear slips which I would always think of as a short dress and not underwear, but it always looked cute. It's one of those games where I think "if I went back I could give it another play", however after remembering the crazy nerfing there's no point. It was nice though when they introduced Kashyyyk and the space combat in the later expansions as it really evolved the game.

SWG will always have a place in my heart, just like other offline games do, I remember riding around on my speeder lots, as well as lots of walking and killing of random creatures, as well as Rancor raids which were lots of fun.