Thirty One: Looking back at Last Call

Keeping with the looking back at theme today it will be a little obscure game known as Last Call. Which you may or may not have heard of, although I'll go with the latter. Last Call was a PC game developed by a company called Culter Creative and was released back in 2000, although to me it was released years before 2000 as it's got such a large imprinted memory in my brain, so much that there's no way it only came out 11 years ago.

Last Call which you may be able to guess from the name of the game, is set in a bar hence the name "Last Call", now I've never been one for Alcohol, but something just drew me to the game. Myself and my sister had a demo of it back in an old PC Gamer or PC Zone of some sort, and played it pretty much to death, until the demo sadly ended.

It was a bartender simulator; you were given a set amount of time to create drinks for your customers. This also involved ID'ing people, the only issue I ever had with it was because I wasn't 100% sure on what year the game thought it was, this then making it difficult to judge if the patrons were underage or not. Plus of course by UK law someone over 18 can drink, where as in America you have to be over 21. The one thing I will always remember about Last Call, was that I was serving all these drinks I had never heard of, not only the occasional spirit but also the final cocktails or mixes. Some may think of it as a game that teaches you how to make drinks, I always found it to be a great game to waste a lot of time in and serve comical customers who just wanted something to drink.

The bar was full of a whole range of characters, from a nerdy guy, to a super hero or even a talking hedgehog, either way I always found it really funny to hear some of the lines. Even if I may have been a bit young to properly understand them all. 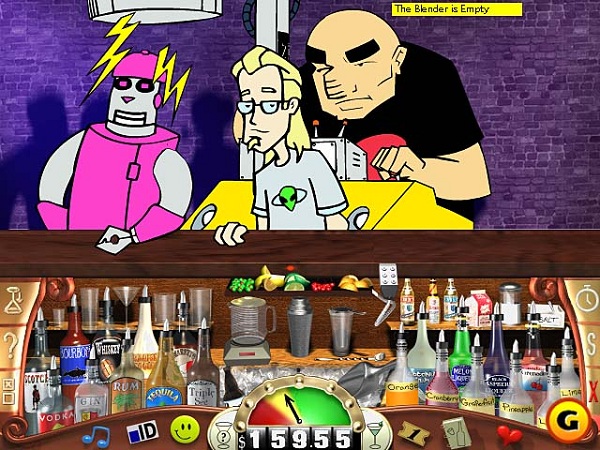 The aim like most timed simulators like Diner Dash and the like was to get enough tips before the end of the shift. Your tips could be larger by making sure to be 100% accurate with the drinks you serve and from flirting with customers of the opposite sex.

If you know of Last Call or are interested in it you can also read the post-mortem of Last Call on Gamasutra which is an interesting read for if you've played the game and is written by the games' creator John Cutler.

If you're interested in Last Call it was actually called Happy Hour in the UK and Europe and you can pick it up for as little as a few pounds on the internet. I never actually owned a full version until just now when I bought it off ebay. Sadly Last Call was the only game that Cutler Creative developed, at least there are two fans in my flat and it's one game I'll never forget.