Twenty Four: Looking back at Bubsy in Close Encounters of the Furred Kind 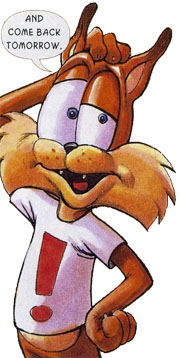 So it would seem that Monday's now have a reoccurring theme, and that is looking back at games that I really enjoyed, or perhaps just looking at a new retro game that I've picked up. Sticking on the theme of last week with a focus on the SNES (even though Cool Spot and Bubsy had multi-format releases) especially as I have fonder memories of playing Bubsy on the SNES.

So Bubsy Close Encounters of the Furred Kind is the first title in the Bubsy series released in 1993 by the now defunct Accolade and was not only on the SNES but also a little later on the Mega Drive.

The story focused around a race of fabric loving aliens known as "Woolies" which I always loved because of the similarity with my last name. These aliens have only gone and stolen the world's entire yarn ball supply, for which Bubsy was a major collector of. Hence the reason for Bubsy having to try and save the world, and his yarn supply.

One of the multiple great features of Bubsy was his extremely animated self, be it while stunned or dying you would on multiple occasions see him shake water off his fur, scream from falling a great height or even walking around like an accordion (to his death) when crushed by a boulder. These animations work greatly to bring a comedic quality to his character as well as creating a more believable character to sit in his crazy environment.

As well as being a really interesting character you can also tell just from the title of the game that he's set in a huge parody, if only by name. A few examples being A Bridge Too Fur, The Good, The Bad and the Woolies and Dances With Woolies. Everything seems almost like a huge joke, however that gives the game it's charm. 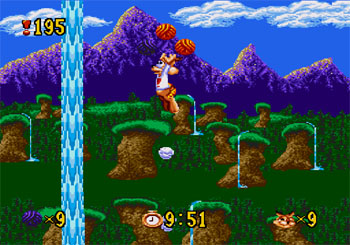 Some of my greatest memories are wincing at just running into an enemy, trying my best not to die or totally forgetting the great level names only to see them again. However my favourite memory of Bubsy is trying to get my mum to give it a play, and her not understanding why she just died when she walked into an enemy and her very hesitant movements in game because of it being such an alien concept to her. Although it's worthwhile knowing I'm not making fun of my mum playing, but it's one of the things that keeps Bubsy so close to my heart.

Sadly the Bubsy games were somewhat ruined with the release of the final game, Bubsy 3D which took the Bubsy games not only to a new console, but to a whole new dimension. Developed by a new studio, Eidetic were bringing Bubsy to a whole new generation of consoles, allowing the series' fans to see what Bubsy would be like in a whole new way of playing. Sadly Bubsy 3D didn't live up to the high expectations that the fans wanted and it is now known as one of the worst games of all-time. Of course this depends on the person playing the game, but sadly it never lived up to the bright and bubbly, nicely animated Bubsy that I was used to in a great 2D game.