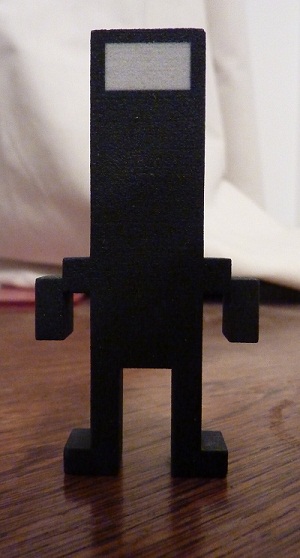 A while ago I ordered my own little Commander Video from Voxelous a while back and it mysteriously appeared today. It's only mysterious as I had forgotten about it. The box he came it had gotten bashed up to hell, but luckily he was safe in bubble wrap.

He's super high quality and feels really sturdy for what he's made out of, I highly recommend picking one up for all those BIT.TRIP fans out there. Now if only we could get SAGA or COMPLETE in the UK, preferably the Saga as I would like to play them all on my 3DS. I would also be quite happy with a Steam release of all the games as well.

The BIT.TRIP games for anyone that doesn't know is a series of arcade style titles created by Gaijin Games and are rhythmically focused and hugely entertaining to play. They started off being released on WiiWare and have now branched over to Steam, iOS and now full blown retail titles for the Nintendo Wii and 3DS. The gameplay of the games range from a Pong style experience, a shmup to a simple rhythm based pressing a context sensitive button when required.