Two Hundred and Five: Everyone should go and play Bastion 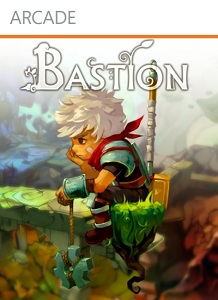 Bastion has been out a few days now and was the game to start off this year's Summer of Arcade on Xbox Live.

After playing all the way through from start to end (and I intend on playing through it again) and I loved it to pieces.

Not only does it look stunning, have an interesting array of weapons each with different ways to utilise them, it also has an amazing soundtrack. Which I only hope Supergiant Games release for sale in the future.

Of course one of its interesting points is the constant narration throughout the game. Similar to how Alan Wake does it, only at set moments throughout the game, but it's not from the protagonist's perspective. At times it does narrative a lot over your whole journey which some may find annoying, but I loved it.

I believe it's also coming out on PC for any non-Xbox 360 owners out there.

Go buy it now! It's 1200 points and is totally worth it, if you're unsure give the trial a go and see what you think.