Two Hundred and Forty Six: An entertaining festival: my day at VSM

So on Friday I gave details of the Vision Sound Music festival. I didn't attend on the Saturday but managed to attend a large portion of it on Sunday. The only reason I found out about the festival was because of BUG going on which I guess means it wasn't that well-advertised. Being the last day of the festival it had been tagged as the family day, encouraging children to come along and learn some interesting stuff. This did however mean that was the core audience with a severe lack of anyone older than about 15 that wasn't a parent. I felt this was a little bit of a shame as it could have really interested some in getting into games.

I started off the day with Child of Eden which was really interesting to see how easily children can jump in and get used to the controls. The only real disappointment was they had to turn the volume down a lot so as to not disturb other sessions. Making the game seem less impactful, especially as the projector washed out the picture quite a lot as well. 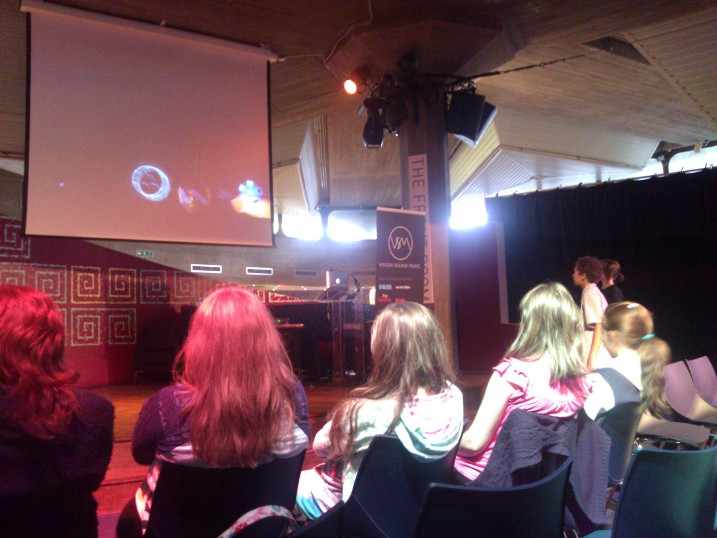 I then popped to the Richard Jacques session which was also co-presented by James Newman (I used one of his books throughout university!), I'm a big fan of his music so I was looking forward to seeing what his talk entailed. With a greater focus on his more recent music from Alice in Wonderland, Little Big Planet 2 (move pack too) and Bloodstone. As expected it was a great session to attend and I really hope it got through to the kids. As he showed off the complexities of creating music for games as well as exactly how LBP mixes its music together based on their area based music triggers. It wasn't really anything new to me, but was still an enjoyable session that was well worth attending. 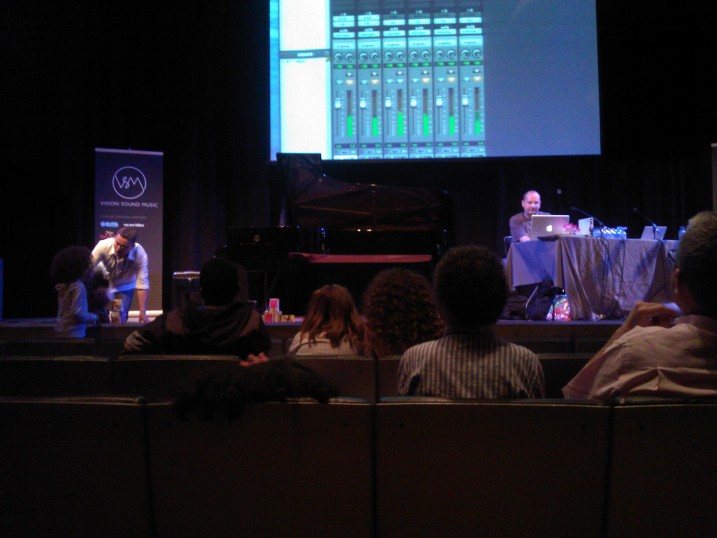 After a bit of a break with some yummy pulled pork from Pitt Cue Co, which was great timing as it was officially their last day in London. I then popped back to the Southbank Centre to check out some Theremin Hero.

Although it was all running a little late so I sat on a chair and did some of my Poogie crocheting. Luckily with the time I had I was able to finish a large number of rounds that had the same number of stitches, leaving only a few different stitches here and there left.

So after a little waiting we could head on in, Greig was getting his final pieces set up and he started his show, we were firstly shown a video of Segata Sanshiro and his advertising for the Sega Saturn in Japan. Sadly it all went over the heads of the audience who hadn’t heard of the Saturn, and probably didn't realise SEGA used to develop hardware, but I may be wrong. We were then presented with an array of amazing feats, be it having the Theremin programed to work with Super Mario Bros on the NES (though an emulator) as a controller, or a beautiful rendition of To Zanarkland and the Metal Gear Solid theme.

I was very happy and lucky to of had a play of Mario on the NES with Greig's Theremin, sadly I have never sucked at it so much in my life before. Mario is of course easy to play when you get the hang of his movement speed and jump. However when playing with a Theremin, unless you’ve used one before (I haven’t) they obviously take a lot of getting used to as it’s a very sensitive instrument. 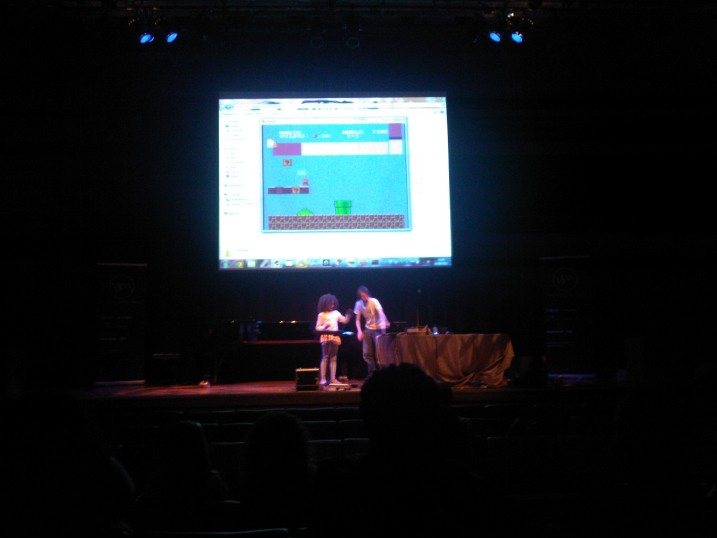 We were also treated to an awesome melody of Zelda music, chiptune style through his Game Boy and NES with a little help from the Theremin here and there, which although lasted quite a while it was very memorable and a great performance. We were also shown Theremin Hero aka Guitar Hero 3 working with a Theremin, Greig showed us his skills with playing "To Those Who Fight Further" as played by the Black Mages. He even let a child from the audience have a go, although he hadn’t heard of any of the bog standard guitar hero songs so was a little rusty. 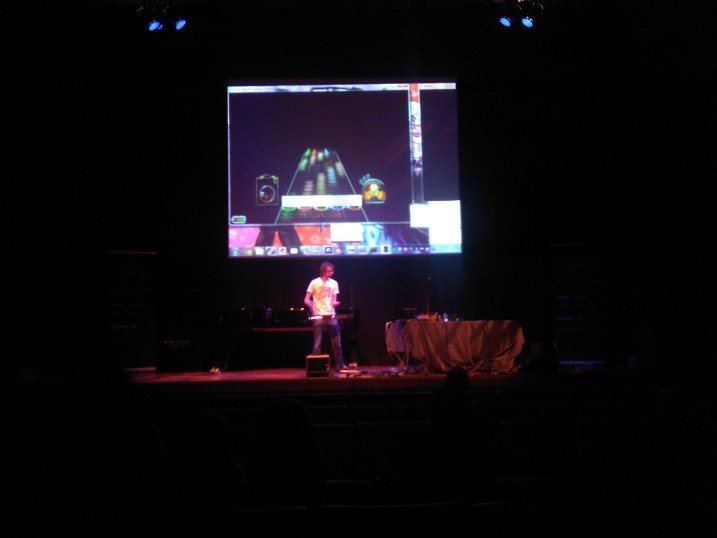 The event finished with a lovely bit of Tetris on a laser harp which was great, although a shame that there was a lot of light cast on him, meaning you couldn't see the lasers unless you looked up at the ceiling of the theatre.

Overall I was super happy that I attended the Theremin Hero session as I was quite intrigued by it originally when I first saw the video on YouTube. I highly recommend you check Greig out if he does any performing near you!

I ended off the day with an epic Best of BUG 2011, Adam Buxton as always was hilarious and even performed a live rendition of "Help the Police", as well as add in a little Bronholm, which any listeners of the Adam and Joe radio show will know what I’m on about. There was a countdown to the show of Adam cycling in, which was a nice little touch, the show was great and I only hope that I’ll get to see another BUG show either by the end of the year or next. 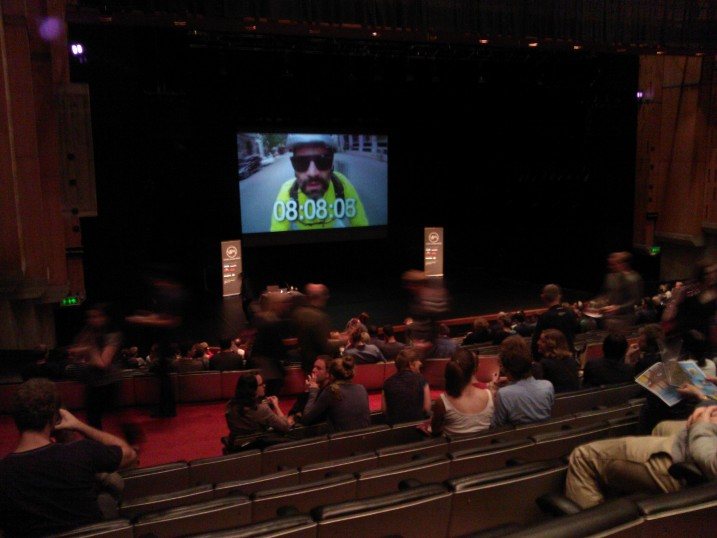 Excellent day although I did come home super tired after being in London all day.