I had a few things to deal with in the morning but by about 1/2pm I had made it to the Eurogamer Expo with the intention to play a few games and meet up with some people that I knew were attending the show on the Friday.

By the end of the day I hadn't actually played too much, I got a little Awesomenauts in, some Saints Row the Third, Joe Danger: The Movie and some awesome Super Mario 3D Land and Mario Kart 7. Which actually when thinking about it was a hefty number of games, meaning I could cross a lot of them off of my list.

I was also able to meet more of the team from Ronimo games; the developers behind Awesomenauts. After meeting Jasper back at E3 I definitely had to make sure to say hi again, and I must say what a lovely group of guys they are!

I also had the chance to say hi to an old EA friend and talk to some people from Hello Games, which overall turned out to be a great first day of the event which meant the Expo had gone off with a great start if you ask me. I feel I spent a lot more time talking than I did playing games though, but there’s nothing wrong with that, I’ve got another two days still!

I wasn't attending Eurogamer Expo with the intention of nabbing as much "free stuff" as possible like some attendees. However I was given a lovely Monstermind badge from the great Mike Bithell. Plus some Joe Danger the Movie badges from Aaron of Hello Games. 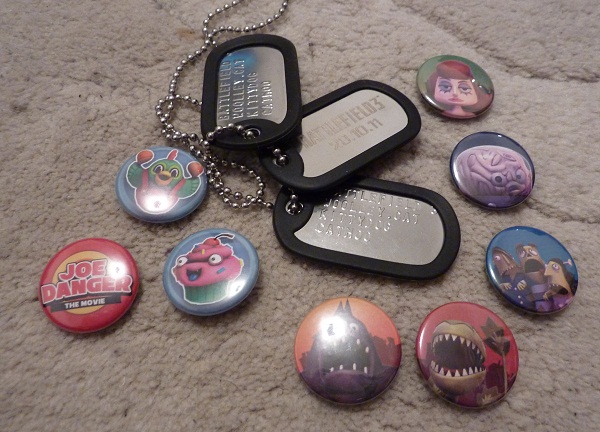 As well as that I made sure to pick up a pair of Battlefield 3 dog tags which literally had my name on them...after I asked for my name to go on them that is.